Yokohama F. Marinos finished as J1 League 2021 runner-up behind eventual champion Kawasaki Frontale. The Marinos challenged Azzurro Nero for the coveted trophy throughout the competition, but their title bid fell short in the latter months of Japan’s topflight football league. In their last 10 fixtures, Yokohama only won four matches but lost the same number of games and drew trice, allowing Kawasaki to capture J1 for the fourth time in team history.

Unaffected by offseason changes, Yokohama emerged as one of the top five teams to win J1 this 2022. As of July 27, the Nissan Stadium-based squad leads the league with a 13-6-3 win-draw-loss record. With 45 points, Yokohama is five and eight-point cleared against second and third placers Kashima Antlers and Kawasaki. The Tricolor’s current odds in Singapore Pools to take the J1 2022 crown is 1.90, while CMDBet also favoured them with 1.45 odds. 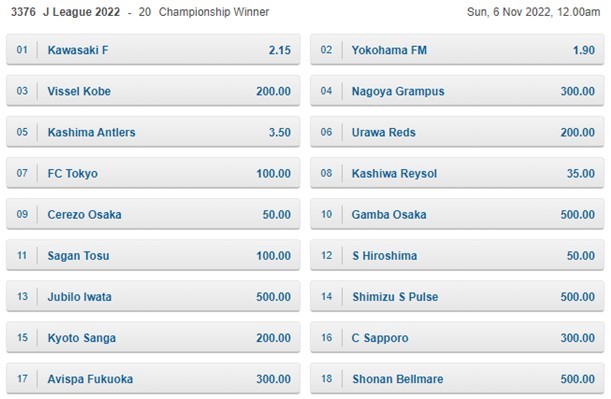 Bettors trying luck in J1’s outright betting market must research thoroughly to increase their chances of winning. Researching can help bettors make informed betting decisions based on reviewing statistical figures and analysing previous head-to-head matches. Claiming the J. League title is imminent for Yokohama because of the following factors:

Muscat Aiming to Change People’s Perceptions About Him

Some players, coaches, and fans worldwide branded Kevin Muscat as a dirty football player because of his controversial tackles. Muscat is aware of this and aims to change people’s perceptions by leading Yokohama to long-term success.

Last J1 2021, the former defender for the Australian national team already showed brilliance in coaching brilliance, as he led the Marinos to second place. He achieved that feat upon taking the managerial position from Ange Postecoglou, who departed to Scotland for the Celtic coaching job.

Currently, his squad has a strong chance of uncrowning Kawasaki once again, with the first during the 2019 season. Yokohama is still in contention for the Asian Football Confederation (AFC) Champions League title after qualifying in the knockout stages. For Muscat, winning J. League 2022 and other trophies means bringing the Marinos’ winning tradition back and establishing himself as a good coach on the pitch.

Tricolor is the league leader in scoring goals by finding the back of the net 48 times. This might surprise bettors, considering that 2021 J. League Top Scorer Daizen Maeda left Yokohama to reunite with Postecoglou in Celtic. Maeda scored 23 goals last season, and filling the gap can be difficult.

The Marinos found the answer in Leo Ceara, Takuma Nishimura, and Anderson Lopes, as the three forwards combined for the team’s 25 out of 48 goals. Ceara, alongside Kashima’s Ayase Ueda, struck 10 goals to lead J1. He also ranks fifth in shot attempts, with 38 – 18 of those on target, good for sixth place in the said department. New additions Nishimura and Lopes proved that signing them isn’t wrong by contributing eight and seven goals, respectively.

If Ceara, Nishimura, and Lopes keep scoring the same way they did in 22 matches, Yokohama can see themselves lifting the J1 2022 trophy. Making this possible comes by creating chances for the three and other potential goalscorers.

As key players left the club, there were many changes in Yokohama’s roster in J1 2022. Yokohama had to sign new members in the offseason to improve their chances, and the results produced in the ongoing tournament only prove the worth of those signings.

Anderson Lopes is making an immediate impact in the forward position as the Marinos need someone to replace Daizen Maeda’s goalscoring. Lopes proved his striking when playing for Hokkaido Consadole Sapporo from 2019 to 2021. In J. League 2021, he had 12 goals in 14 appearances before playing for Wuhan FC in the Chinese league last season. The numbers indicate how capable of a striker he is.

The departure of centre-back Thiago Martins and defensive midfielders Takahiro Ogihara and Theerathon Bunmathan also left a huge hole in Yokohama’s defensive line. Fortunately, the Tricolor managed to sign Eduardo from Sagan Tosu to get the service of one of J1’s best centre-backs. They also recruited left-backs Katsuya Nagato and Yuta Koike to strengthen the squad’s defence. Defensively, the three recruits helped the squad limit their goal conceded to 25.

With 12 matches left on average per team, the Marinos are already in an excellent position to bring back the J1 trophy to Yokohama. Muscat so far has produced favourable results for Japan’s traditional powerhouse club. The Tricolor also has potent goalscorers capable of beating the defence while new recruits deliver quality minutes. Given these factors, bettors might consider placing wagers for them in the outright market.

However, bettors must not only rely on the Singapore Pools odds and fixtures to choose the team to bet for. Football is unpredictable because various factors can influence the league’s final ranking until the last match week, including red cards, injuries, and upsets. Because of this, bettors must continue researching J1 teams, previous matches, and individual and team goalscoring records. This way, they can place informed bets for better winning probability.

Bettors can bet on football by registering in a trusted online casino. Sign up at CM2Bet for a reliable and scam-free betting experience.