Clubs not only compete in J1 League 2022 for the crown but also to qualify for the Asian Football Confederation (AFC) Champions League next season. The champion and runner-up get a direct qualification, while the third placer proceeds to Champions League qualifiers. With J1 2022 nearing its end, teams continuously strive to remain in contention for the top three.

Bettors betting for the outright J1 winner must stay updated with the latest match results. Football leagues, like J1, are always unpredictable, so researching the team’s chances and the reason behind their potential success is important before taking chances on Singapore Pools football odds. Although success is not guaranteed, research helps bettors to bet strategically.

Here are the teams with the highest chances of making it into J1’s top three: 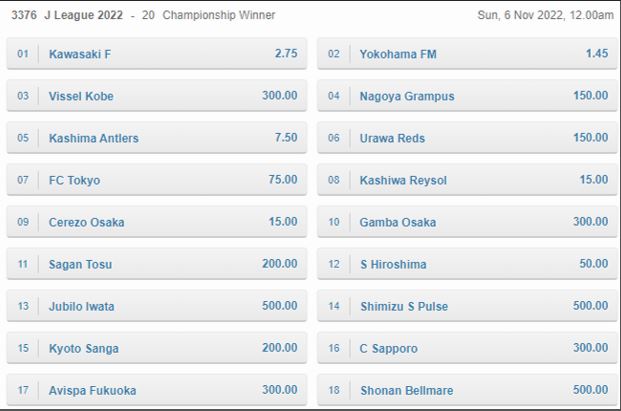 Yokohama F. Marinos is undoubtedly one of the teams favoured to be in the top three. Currently leading the league, the Marinos are six and seven points cleared against current second and third place Kashiwa Reysol and Cerezo Osaka. Unfortunately, no lead is safe.

Yokohama seems to take control of the title race after defeating Kashima Antlers in Match Week 23. However, Kawasaki Frontale ended their celebration immediately in the following week. In their last match this August against Shonan Bellmare, one of the J1 League teams at risk of relegation, the Marinos must achieve favourable results or let other clubs catch up.

The defending champion Kawasaki Frontale is in unfamiliar territory right now, occupying fourth place as of August 8, 2022. Their lacklustre performance in previous matches came costly, allowing Yokohama F. Marinos to gain leadership. However, it is too early to count one of the top five teams projected to top J1 2022 out of the top three.

Kawasaki still has 12 matches left, with five scheduled this August. Last Match Week 23, Toru Oniki and company officially kicked off the proper title fight by beating Yokohama. Bettors can see the four-time J1 winner back to the top of the standings if Kawasaki manages to win their next four fixtures against:

The Kashima Antlers was once behind top-ranked Yokohama. However, their winless run in the last five matches dropped them to fifth place in the current J1 2022 standings as of writing. The Antlers must stop their losing streak this August to propel themselves back for the title race and top three. The Ibaraki-based squad can still do so with three matches remaining this month.

Scoring wins against Avispa Fukuoka and Shonan Bellmare can push them back to second place. These victories can also give them momentum going to their fourth and last August fixture facing Kawasaki. If things go to plan, Kashima might gain J1 leadership temporarily, especially once Yokohama F. Marinos, Kashiwa Reysol, and Cerezo Osaka lose or draw their matches.

Other Clubs Still Capable of Reaching the Top Three

Kashiwa Reysol and Cerezo Osaka are the two clubs with great chances to earn direct AFC Champions League qualification or progress to its qualifying stage. These two teams were in the middle or lower table last J1 2021 and surprisingly catapulted themselves into the upper table this 2022. Taking chances on Singapore Pools football odds and fixtures on these teams can potentially allow bettors to win more money.

Kashiwa Reysol has a strong chance to take away the J1 2022 leadership from Yokohama F. Marinos this August. To do this, Kashiwa only needs to defeat Sanfrecce Hiroshima, Shimizu S-Pulse, and FC Tokyo in their last three August matches. This is imminent considering that the Nelsinho-mentored squad won four of their previous five matches.

Like Kashiwa, Cerezo Osaka also performed well in their last five fixtures by winning thrice and drawing twice. This August, Cerezo can go higher in the standings o retain their hold of third place with two games left against Consadole Sapporo and Sanfrecce Hiroshima. Favourable results can also increase the point gap between Cerezo and tailing Kawasaki Frontale and Kashima Antlers, occupying fourth and fifth place.

With J1 2022 closing near, bettors must keep researching relevant information to make informed bets when betting on the outright winner. Relying on the odds provided by a sportsbook alone is not enough to successfully guess the eventual top three. There are various factors that can probably affect the outcomes of matches, including team performance and injuries. Researching leads to better decision-making revolving around statistics and recent head-to-head matchups.

Bettors only need to search for a reputable SG online casino with a game provider offering odds for J1 2022 for the best betting experience free of fraud and scams. Start betting on football by registering at CM2Bet.