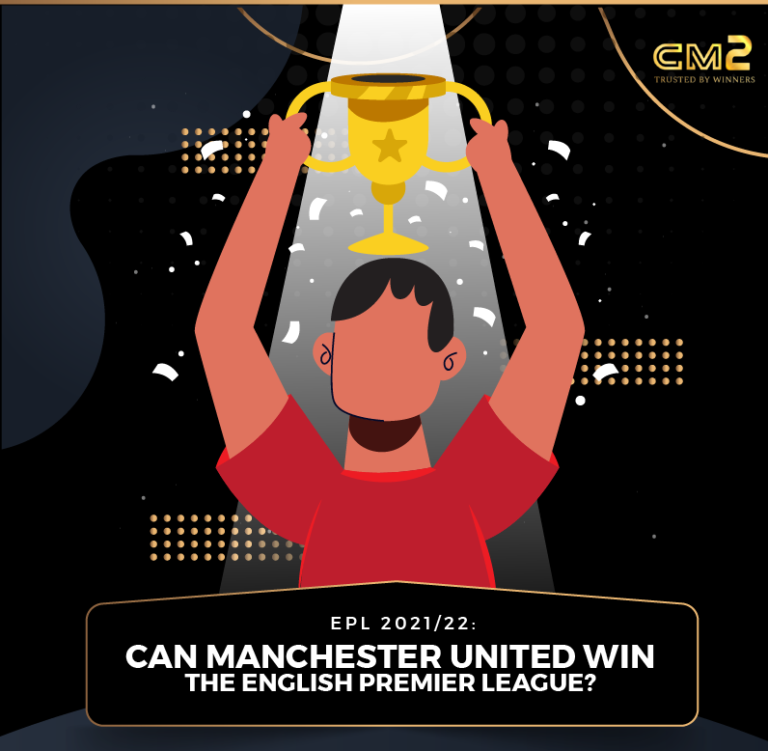 As of September 24, 2021, Manchester United, Chelsea, and Liverpool are tied and have 13 pts each. Each team has four wins and one loss in the league, and there’s a chance that United will win this season’s league.

In one of our previous articles on everything bettors need to know on the 2021/22 English Premier League, we provided the Outright Singapore football odds for the top EPL teams, and Man United’s odds were 5.75. As of September 24, 2021, their odds are now 4.5, while Chelsea and Manchester City have 2.9 and 3, respectively.

Manchester United hasn’t won the Premier League since the 2012/13 season, but because the season is still long and United’s current odds, there’s still a big chance that they’ll win the current league. Below are some factors that can help United win the EPL.

Manchester United placed third in 2019/20 and second in the 2020/21 EPL season in the previous seasons. Based on these things alone, it can be somewhat reasonable to think that United can win the 2021/22 season.

United has made a huge step forward from simply fighting for the top four to fighting for the title. Current Outright Singapore Pools EPL odds show that Man City has better odds than United at winning the title, but United is currently talented enough to take the next step and win the league. Also, remember that United hasn’t lost while Man City lost a match against Tottenham on August 15 and had a draw with Southampton on September 18.

The team has also been constantly improving and evolving, especially since it’s been able to keep hold of Paul Pogba and get other players to improve their defence.

Raphael Varane’s arrival to Manchester United can be a turning point in United’s gameplay as he significantly boosts the team’s shaky defence. The 28-year-old Frenchman has plenty of experience, is great in aerial battles, and is a great fit with Harry Maguire for United’s defence.

Varane is now working with Manchester United defenders. Raphael Varane will work together with Harry Maguire in the centre while being surrounded by Luke Shaw and Aaron Wan-Bissaka, who can form a rock-solid defence for United.

Jadon Sancho isn’t a player that sports bettors and other players from other teams should forget, especially since Sancho came from Borussia Dortmund after playing exceptional Bundesliga seasons for the team. He is Manchester United’s new £73 million signing.

Sancho can create a solid partnership with Cavani and Rashford, especially since they already know each other when they played together for the Three Lions’ national team. He is quick on the ball, great at dribbling, and can pass the ball through an opponent’s defence.

Unfortunately, Sancho has had a difficult start in Manchester United and has failed to score a goal or claim an assist in his first appearances for United in the EPL and the Carabao Cup. If he is given enough time to adjust and isn’t replaced by Rashford as a winger, he can potentially prove to be a good investment for United.

United’s primary strength is its varied options in attack, with Edinson Cavani scoring 17 goals in the last season. United also has other players, including Anthony Martial, who will be a top asset if he can get back to his form two years ago when he managed to make 23 goals, as well as Mason Greenwood and Marcus Rashford.

The key to allowing the players above to score is Jadon Sancho, if he can finally adjust and fit in with the team. Sancho can potentially unlock defences and create chances for other players while also taking pressure off Bruno Fernandes, who made 28 goals and provided 18 assists last season.

So far, United has been faring well and hasn’t lost a single match, even without Sancho making a score or an assist. Should Sancho start fitting in and proving his worth, United has a bigger potential of winning this season.

Cristiano Ronaldo is one of the best football players in the world who had a duopoly with Lionel Messi for the Ballon d’Or. These two players dominated the football scene for a long time, and having one of them in a team without the other playing for another in the same league can potentially prove to be a game-changer.

Ronaldo has rejoined Manchester United and improved United’s odds of winning the English Premier League title. He played for United from 2003-09 and scored 84 goals in total in his 196 appearances until he left for Real Madrid in 2009.

Ronaldo has won the Ballon d’Or five times and has made over 674 club goals throughout his career.

We’ve already talked about the different players improving United’s chances of winning the season, and we’ll continue it here thanks to the many players who have another level to reach after the last EPL season. The following are the players that people expect something of in the current season:

Martial is one player that people are looking forward to, especially once he’s recovered from injuries and gotten back to his best this season. He might be the key to United’s success this season.

Wan-Bissaka showed his attacks improving towards the end of the last season and during the pre-season. He’ll likely want to continue this for the current season.

Cavani is a player who can feed off the Old Trafford crowds’ support and add some spark to his game.

Manchester United has plenty of players who can improve its chances of winning the season, ranging from newcomers like Varane and Sancho, returning player Cristiano Renaldo, improving long-time players, and others like Luke Shaw and Paul Pogba being in brilliant form. United currently has a mix of experienced and young blood in its ranks.

United now has a proper mixture of youth and experience to perform well in the season and prompt sports bettors to bet on Manchester United on Singapore Pools football fixtures where they’ll be playing. Bettors only need to look for a Singapore casino that has great sportsbooks like CMDBet and UG Sport.