The 2022-2023 season of Ligue 1 is well underway, and numerous Singapore football betting sites are already filled with bettors hungry for sports bet winnings. Powerhouse club Paris-Saint-German (PSG) won the 21/22 championship, making them clear favorites to win the title again. But other teams in the tournament are capable of dethroning the Parisian club, and many bettors risk their money on them in exchange for a hefty profit when they win.

If you are playing in Soccer betting Singapore pools, one of the most popular markets for sports bettors is predicting who will win the title by the end of the competition. With the current Ligue 1 season already nearing its halfway mark, now is the right time to predict who will be crowned as France’s top football club. And if you have no idea about SG pools football odds for Ligue 1 winners, here are the teams that can win the prestigious trophy next year. 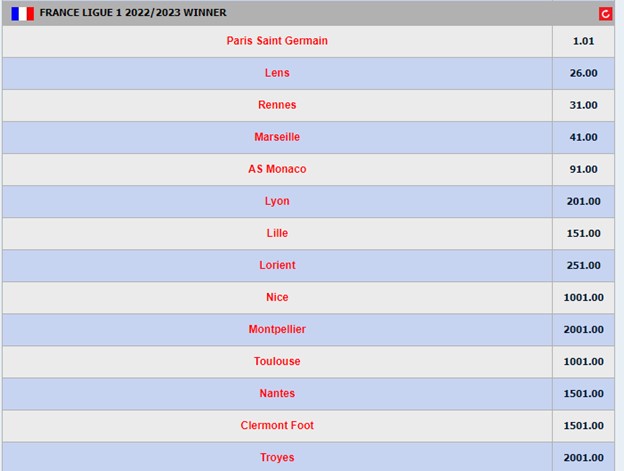 PSG remains the favorite to win the 22/23 Ligue 1 championship. Last season, PSG dominated Ligue 1 and won the title with a month to spare, leading to them grabbing their 10th overall Ligue 1 title. And during the offseason, Kylian Mbappe’s surprising decision to stay in Paris for three more years gave them a massive boost in their title defense. They currently have 1.01 odds of winning the title.

However, PSG’s composure will be tested in the next few months as some key players will participate in the upcoming 2022 World Cup in Qatar. Apart from Mbappe, who will lead France in their World Cup title defense, Lionel Messi of Argentina and Neymar of Brazil are also expected to reach the later stages of the competition. This can affect the fitness of PSG’s big three, which means other players in the club must step up in their games after the World Cup break.

After spending five seasons in Ligue 2 from 2015-2020, Lens is back at the top flight of French football and looks like a legit contender for the title. They finished their last two Ligue 1 seasons in seventh place and are able to keep in touch with PSG for the title. They are now sitting behind PSG at the table, only trailing by five points, and are five points clear of Rennes in the table.

Currently riding a five-game winning streak heading into the World Cup break, Lens is a legitimate threat to PSG this year. The club has 26.00 odds of winning the trophy and is looking to win their second title in team history finally.

Rennes has always been in the top 6 teams in the last three seasons. Because of this, countless bettors and Ligue1 followers believe that Rennes is one of the teams to watch this season. The team won the Coupe de France three years ago and will gun for the title this year.

As of writing, the club from Northwest France is looking good at 3rd place, already winning nine of their 15 games, and is only 10 points behind PSG. They have 31.00 odds of winning the chip and might become a surprise team when the season continues by the end of December.

After winning the 2009-2010 season competition, Marseille has failed to clinch the title again, with the club finishing in 2nd spot in four of the last 12 seasons. With the emergence of PSG, Marseille has struggled to keep up, but things are looking bright for the southern France team, highlighted by their recent UCL group stage run, in which they narrowly missed out on qualifying for the knockout phase.

To compete with the Ligue 1 heavyweights, Marseille beefed up their squad with the arrival of key players like Nuno Tavares, Pau Lopez, Arkadiusz Milik, and Chancel Mbemba were added to Marseille. With two second-place finishes in three seasons, Marseille is hungrier to win their next Ligue 1 championship. With Alexis Sanchez now leading the team’s offense, Marseille has 41.00 odds of winning the chip.

Monaco is one of the top choices to dethrone PSG over the years because it is one of the only two football clubs that prevented the super team from winning the Ligue 1. The squad had seven top-3 results in the preceding nine seasons, including multiple runner-up showings and a title win in 2016-2017. As of writing, Monaco has 91.00 odds of winning the trophy and sits in 6th place in the league table.

Monaco should be able to put some pressure on PSG this year because of its relatively steady play. Monaco’s star forward, Wissam Ben Yedder, has been consistently making goals in the past three seasons. Last year alone, Yedder provided 25 career-high goals for Monaco. And with Wen Yedder now supported by other attacking options in Takumi Minamino and Breel Embolo, Monaco could be the one to dethrone PSG this year.

Last season was not the best for Lyon as they finished eighth, the team’s lowest ranking since 1995. Despite this loss, sports fans and online bettors should not count Lyon out, as they are still a powerhouse team in Ligue 1. The return of Alexandre Lacazette after five years in Arsenal can boost Lyon’s offense during crucial games.

This year, Lyon would not compete in UEFA competitions this year, so their only goal is to win Ligue 1. Laurent Blanc recently replaced Peter Bosz as Lyon’s head coach, and the team is looking to use this to build a more formidable campaign once the season resumes. Lyon is currently in 8th place in the table and has 201.00 odds of winning it all.

Ligue 1 betting odds adjust throughout the off-season because of injuries and transfers. Once the season starts, title odds change due to team wins, injuries, losses, and suspensions. French football odds represent what you can win with $100. For example, you must bet $2,500 on PSG to win $100. On the other h       and, voting for underdogs can give you more prizes but fewer odds of winning. For instance, you will win $1,600 on a $100 bet if you bet for Lyon.

If you are looking for a trusted sports betting site in Singapore, look no further, as CM2Bet can bring you wins and prizes. CM2Bet also lets you bet on live casino games, horse racing, mobile slots, and more. If you want to start betting today, you can visit our website at www.cm2bet.com or contact us by clicking here.