Futures or outright betting is a famous market for sportsbook betting in Singapore. Placing wagers on outcomes of future events is an exciting way to add more intensity to every game or tournament and can potentially lead to a massive profit when the bettors win. And one sport that gained exponential growth in the sports betting industry in the past decade is football, with more and more Singaporeans checking Singapore football odds to place bets on their favorite competitions strategically.

And with football season well underway, many are tuned into how things will pan out in different football tournaments, especially the English Premier League. For years, the EPL has been considered the most competitive football tournament in the world, home to some of the best and wealthiest clubs. And one of the most anticipated things every EPL season is the race for the Golden Boot award, which is given to the player with the most goals scored in a season.

So, if you are already looking to place wagers on the EPL top goal scorer market, here are the top picks to win the lucrative award early in the season. 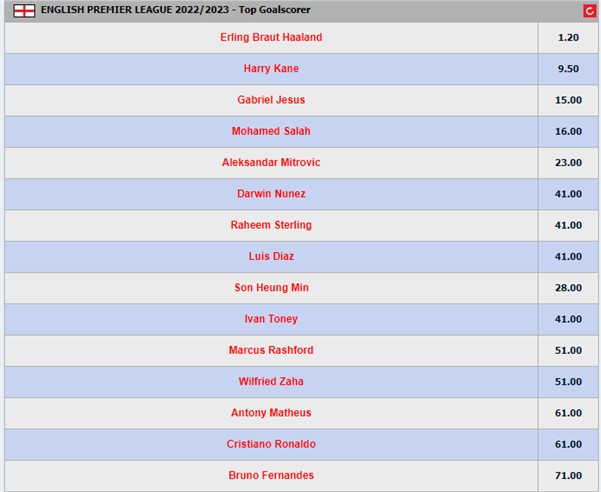 Manchester City made splashes in the off-season with key signings to replace crucial departures of Raheem Sterling, Gabriel Jesus, and Oleksandr Zinchenko. After barely beating Liverpool last year for their sixth Premier League trophy, the Citizens added a world-class superstar striker in Erling Haaland. And for those who follow football closely, Haaland is considered one of the best scorers in any football competition in recent years.

Previously playing for Borussia Dortmund in the German Bundesliga, Haaland gained recognition after three consecutive seasons as one of Dortmund’s best goal scorers. And only at 22 years old, the wonder kid from Norway was given an opportunity to show what he could do in the most competitive football tournament in the world.

Haaland has already taken the league by storm seven games into their season, scoring 11 goals in seven appearances. Of those seven matches, he only failed to score during their 4-0 win against Bournemouth last August 13, where he instead recorded his only assist so far. This is already almost half of their total goals scored so far, with the following players with the most goals scored only having two.

Manchester City’s consecutive games against Crystal Palace and Nottingham Forest, where Haaland scored three goals for each match, highlighted Haaland’s capability to score at will. This can eventually lead to him winning the Golden Boot, which he already has 1.20 odds of winning and breaking numerous goal-scoring records in the league.

If there is one player who should not be a surprise in this list, then it is no other than Harry Kane. The England Football Team captain has scored many goals and has been considered the anchor of Tottenham Hotspur’s offense since 2014. He is the record holder for most goals scored for a single team, and he has already won the Golden Boot three times. And at 29 years old, Kane looks like he is just getting started.

With teammates Heung-Min Son and Dejan Kulusevski struggling, Kane leads the team in scoring, tallying six goals in seven appearances. Some of his goals allowed the club to take crucial wins to stay at the top of the league table, including his brace during their 2-0 win against Nottingham Forest. And with Antonio Conte now having an opportunity to lead the team for an entire season, it is expected that Kane will flourish and contend for another Golden Boot award, and he has 9.50 odds of doing it.

After a disastrous 2020-2021 EPL campaign where he only scored three goals in 27 appearances, Aleksandr Mitrovic’s run in the big leagues is almost considered over. However, new manager Marco Silva trusted Mitrovic and completely changed the atmosphere within the club. This led to them dominating the Championship, with Mitrovic breaking the most goals scored in a single season with 43 goals.

Now back at the topflight of English football, the Serbian national is starting to fire the club to Premier League success, with the team competing at the top half of the table. He is currently tied with Kane with six goals for 23.00 odds of winning the award and is looking to add to that to help Fulham avoid relegation

After spending decades juggling the lower divisions of English football, Brentford made their debut in the Premier League last year. But unlike many have expected, the Bees managed to put up enough points to avoid relegation and advance to their second-straight EPL appearance. Multiple players have contributed to their splendid 2021-2022 campaign, led by Ivan Toney, who chipped in 12 goals last season.

Now playing in his third Premier League season, the Englishman is powering Brentford again, scoring five early goals for the club with 41.00 odds of winning the Golden Boot. It is still early in the season, but Brentford’s continuous success and his first-ever England call-up might be enough inspiration for Toney to score enough goals to win the Golden Boot by the end of the season.

After spending six seasons in Manchester City, Gabriel Jesus transferred to Arsenal with the club looking to have a legitimate striker at the front. The media and some key sports personalities deemed the transfer a perfect fit, while numerous people are not buying the hype for Gunner’s new number 9.

Despite this, Jesus is still one of the best forwards in the past six seasons, and the change in scenery might be the change he needs to elevate to the next level. He is crucial to Arsenal’s steady offense, scoring four goals in 7 matches and 15.00 odds of being named the top goal scorer. Jesus will have more opportunities to score goals moving forward and can be a legit consideration for the Golden Boot award during the second half of the season.

Other Players to Look Out For

Apart from the five players above, plenty of other footballers should not be ruled out when it comes to the Golden Boot race. For example, the reigning co-winners of the Golden Boot last year, Son of Tottenham and Mohamed Salah of Liverpool, are yet to make their presence felt. Salah only scored two goals so far, while Son scored a hat-trick off the bench during their match against Leicester to record his first three goals.

Apart from them, some other players outside the “Big 6” also make waves scoring-wise to lead their teams early in the season. Alexis Mac Allister of Brighton, the only midfielder in the top 5, Rodrigo of Leeds United, and Wilfried Zaha of Crystal Palace have already scored 4 goals for a tied fifth place with Jesus in the goal scorer’s table.

With how things stand, it might be safe to say that Haaland is already the clear-cut winner of the Golden Boot award for the year. However, like other forms of sports, upsets are a regular occurrence in football, and various factors can affect how things will pan out over the next few months. After all, we are only seven games in the tournament, and at least 31 more games will be played by each team until May next year.

No matter who your pick is to win the award, placing wagers on trusted online casino platforms can help maximize your bets and increase your chances of winning. Register now at CM2Bet, a trustworthy online casino in Singapore and Malaysia that you can use to place bets on your favorite players. We also have various online casino games like blackjack, baccarat, and online slots that you can enjoy on multiple devices.